Today is THE anniversary - not when we declared war on the Germans but the 26th anniversary of the best seawatch in UK history. Sadly today's weather was never going to replicate that famous day at St Ives. But it was still a decent seawatch for most of us and a very good seawatch for the hardy few who remained til dusk. Well done to them on finding a Madeiran Petrel. 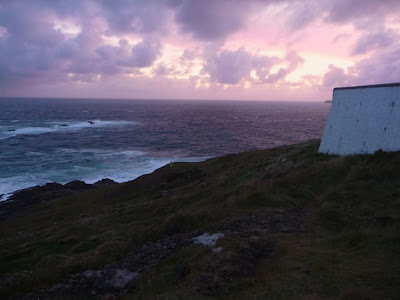 Below are some images of the day as it unfolded. The 4.45am alarm means that you arrive at your favoured spot at dawn to witness a colourful sunrise. 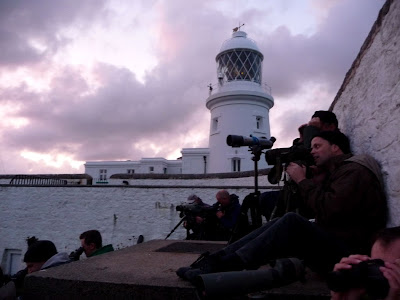 Approx 20 birders had assembled by 6.30am, just early enough to see the Wilson's Petrel go through at 6.45. 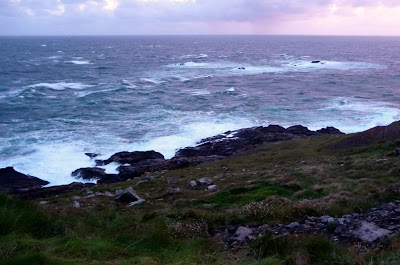 The early start took its' toll on one 63 year old. 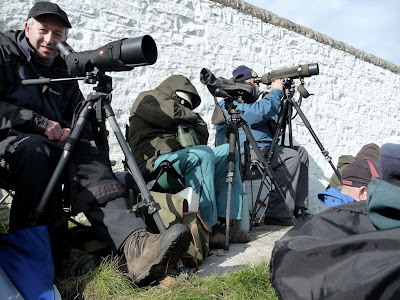 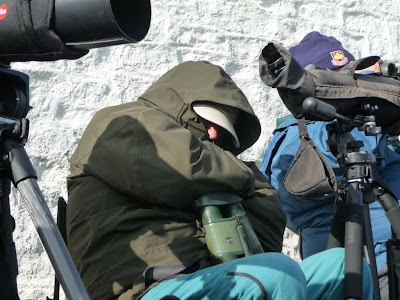 The view below is the 600 metre view to the rocks and the direction where most of the seabirds eminate. The right rock is where the Wilson's was found today. In strong winds such as today, Bonxie, Arctic Skuas, Manx, Sooty and even Great Shears will pass inside the rocks. 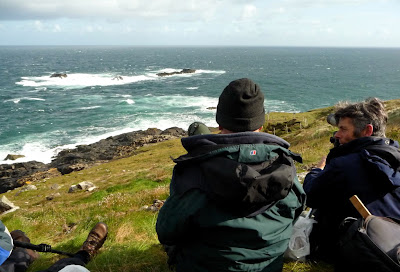 Below are my totals from 6.30 am to 1.15pm today. Other observers may have counted more or less than those below. The totals exclude counts after 1.15pm.
Wilsons Petrel: one at 6.45am just outside the rocks at c.600m and drifted slowly westwards and was on view for a couple minutes, showing the pale upper wing greater coverts, lack of white under wing bar and slow deliberate flight.
Manx Shearwater: an impressive movement, especially at dawn, up to 4000 per hour for the first two hours then a steady, lower flow throughout the period.
21 Balearic Shearwater including one interesting pale bird with short tail, flat belly and obvious dark underwing diagonal bar.
4 Cory's Shearwater, three distant and one at c.800m showed reasonably well.
38 Sooty Shearwater . Several gave close views inside the rocks.
7 Storm Petrel.
23 Arctic Skua (all adults, most with tail streamers showing).
12 Bonxie (all adults).
10 Arctic Tern.
50 + Comic Tern.
23 Grey Phalarope (inc one flock of 18 which settled on the sea in front of us).
2 Sabine's Gull (both adults in summer plumage with black hoods, one giving good views).
3 Common Scoter.
4 Whimbrel.
3 Sandwich Tern.
10 Dunlin.
1 Turnstone.
Posted by swopticsphoto at 15:12