Today has been a relatively quiet day for smaller passerines with generally a complete clear out of yesterday's birds.  Two species were notable though in a good visible migration.  Around 125 Blue Jays, mostly in flocks of 20+,  and a decent passage of at least 40 Northern Flickers were seen between at Higbees and the Point.  Monarch butterflies continued to move through but numbers were well down on yesterday.  Offshore, terns seemed to be moving south in their hundreds. Forster's was the main player accompanied by Royal and Caspian.

Other species of interest that I saw included a Clapper Rail at Stone Harbor and Black-crowned Night Heron at the Wetland Center.  21 Greater Yellowlegs in a flock were also a surprise.  Five Pectoral Sandpipers, four Lesser Yellowlegs, one Solitary Sandpiper and one Least Sandpiper were present at the NC pools though we missed the adult Green Heron.

Tomorrow the wind changes to northerly instead of the hot southerlies of late.  Apparently this means new birds...The images below were taken today in and around the area:

Posted by swopticsphoto at 02:56 3 comments:

Birding in Cape May

I hope to post some updates over the next couple weeks of birding in Cape May, New Jersey.  The place is a well known birding migration hot spot, probably most famous for its Autumn passage of raptors.  Today has been a quiet day by local standards but I've still managed to see American Kestrels, Merlins, Ospreys, Sharp-shinned Hawks and plenty of migrating Turkey Vultures.  Passerines have been very quiet but 20 Common Yellowthroat and 15 Palm Warbler were very showy.  The rarity of the day I'm told is a Clay-coloured Sparrow, a shy bird spending most of its time hidden away in a bush.  Other delights have included many Grey Catbird, Mockingbird, Carolina Wren and Belted Kingfisher.  However, Monarch butterfly stole the show today as hundreds, if not thousands were on the move, all flying south towards Mexico.  The images below are a small token of the day's birding. 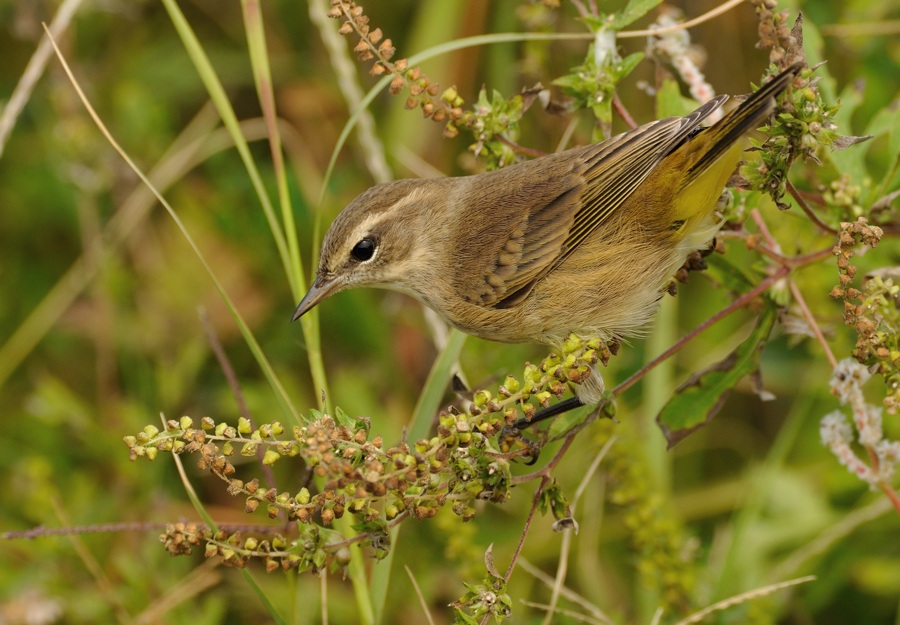 Posted by swopticsphoto at 02:40 3 comments:

What made this Wheatear so sick?

I took this sequence of shots of a first year Northern Wheatear last week. The following are all in sequence and from a burst of shots. On closer inspection it seems that not only do birds regurgitate pellets, but they are physically sick as well.  Looking at the bird's expression, it can't taste very nice! 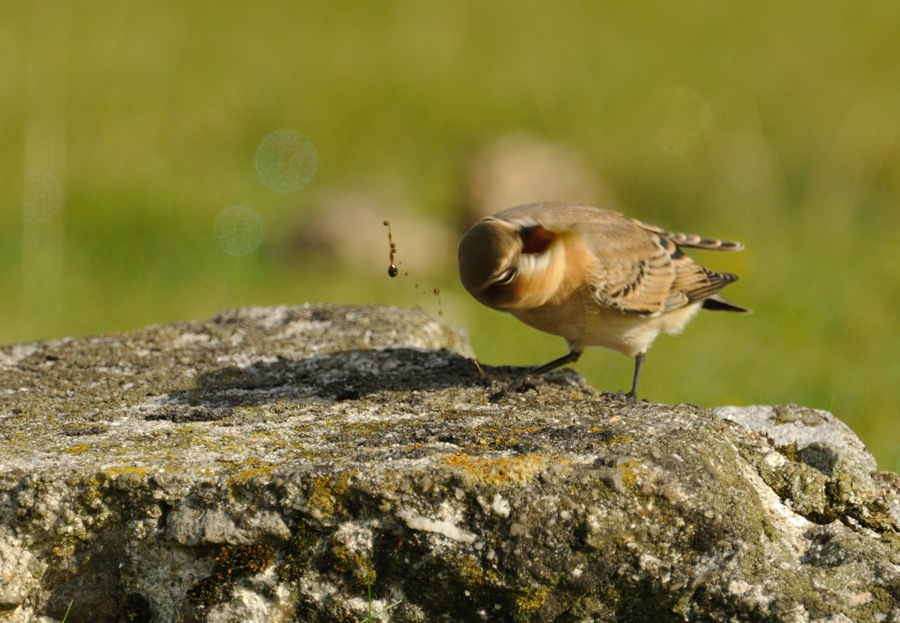 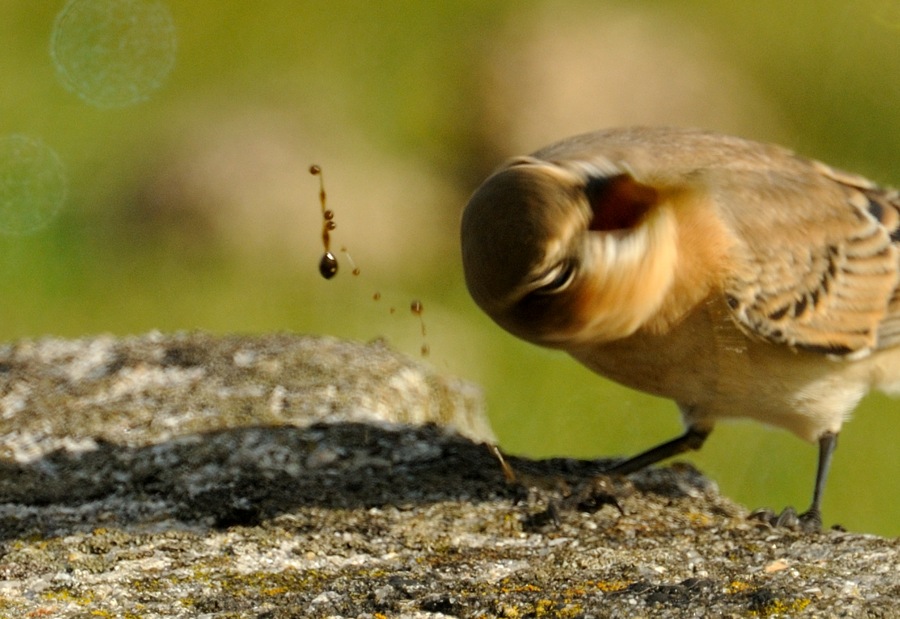 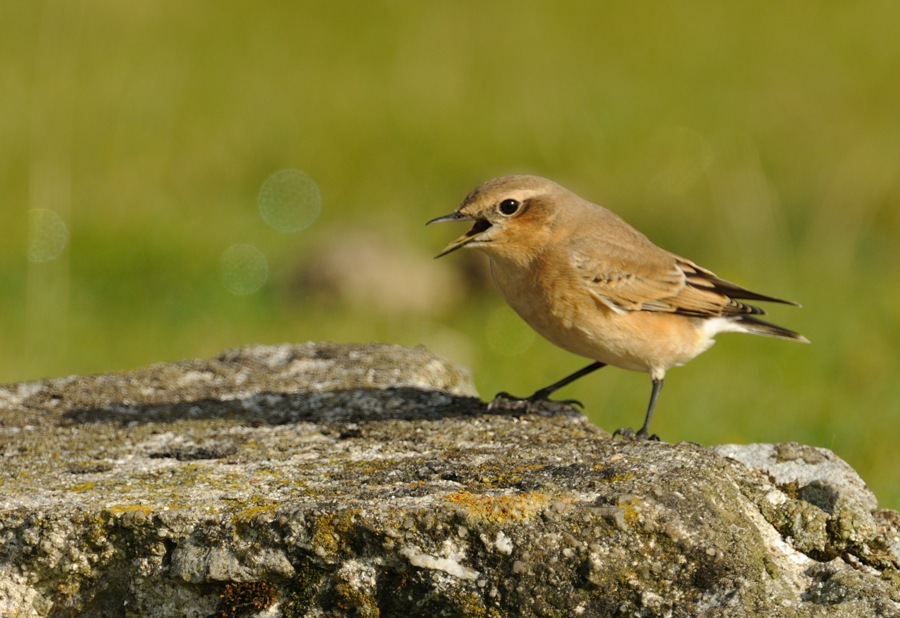 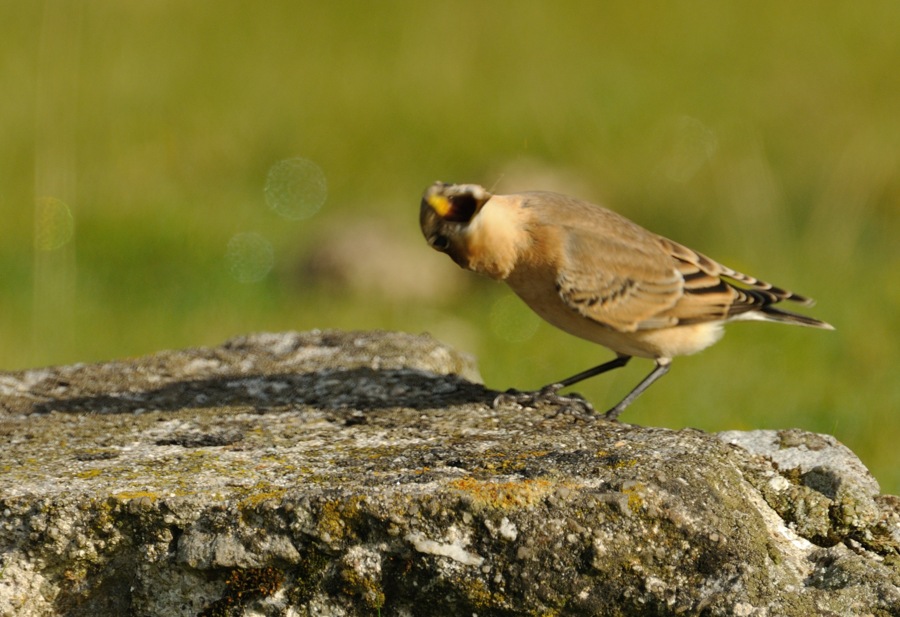 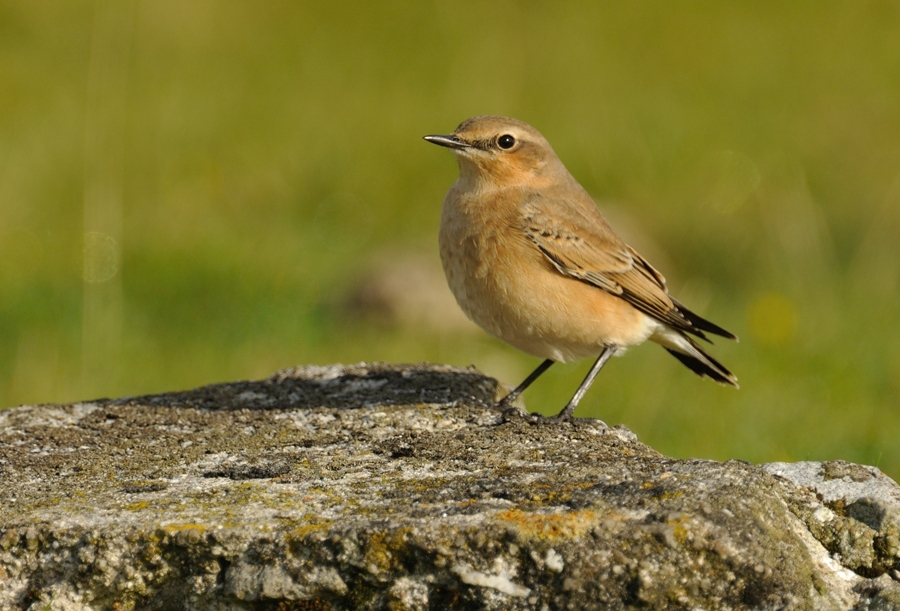 Pectoral Sandpiper at Copperhouse today and totals so far this Autumn

Pectoral Sandpipers have arrived this Autumn in good numbers already. Quite conceivably, at least nine individuals have already reached Cornwall.  The first was an adult at St Clement, then Walmsley and then Carnsew Pool, which I photographed on Aug 9th.  Adults are unusual in Cornwall so the theory is that this bird is probably the same roaming individual. A flock of three first year birds were found on Hayle Estuary on Aug 28th reducing to one on Aug 31st.  Two more juvs appeared at the eastern end of Copperhouse on Sep 6th-8th, reducing to one Sep 9th.  Two more appeared at Walmsley Sanctuary Sep 7th.  A small, runt-like juvenile appeared for one day at Davidstow airfield, Sep 3rd.

All in all, things are warming up just nicely with a supporting cast of Bairds Sandpiper, Lesser Yellowlegs and a stunning adult Buff-breasted Sandpiper already...bring it on. 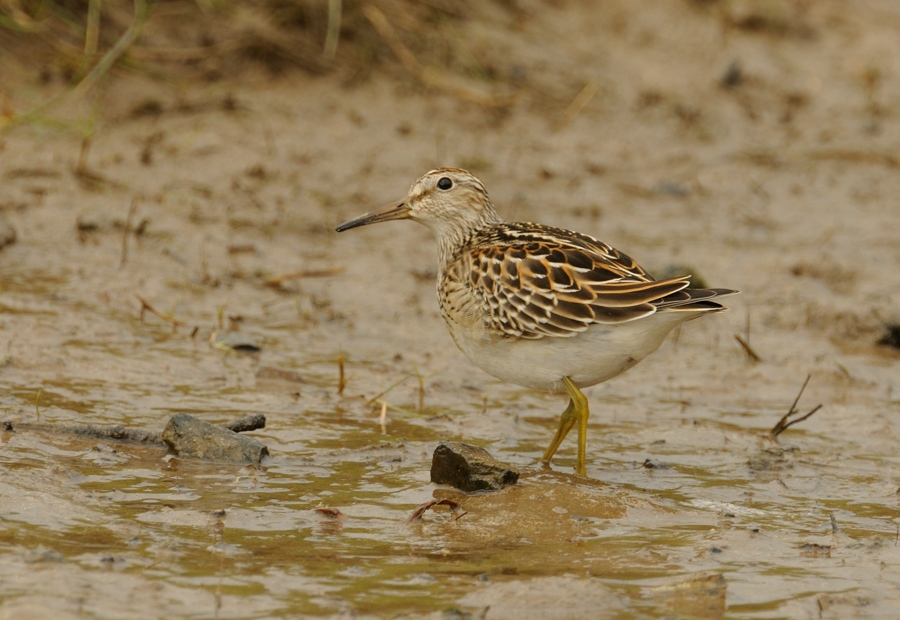 Some images from Davidstow today

I spent the morning searching for unusual waders on Davidstow airfield but sadly found nothing special.  The normal migrants were present including ten Dunlin, ten Ringed Plover, 20 Northern Wheatear, two Whinchat and one Yellow Wagtail. I was also testing a used D300 Nikon camera, the results of which are below. 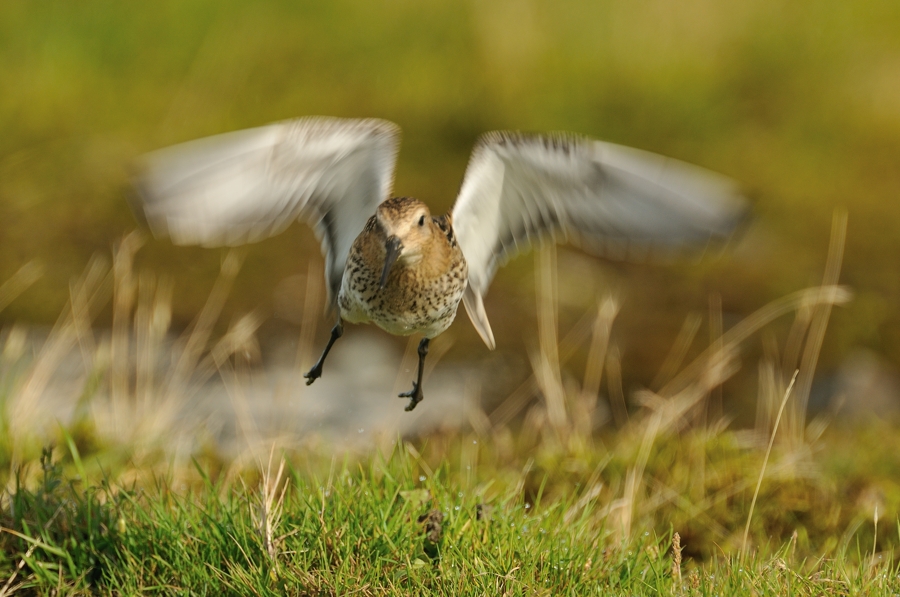 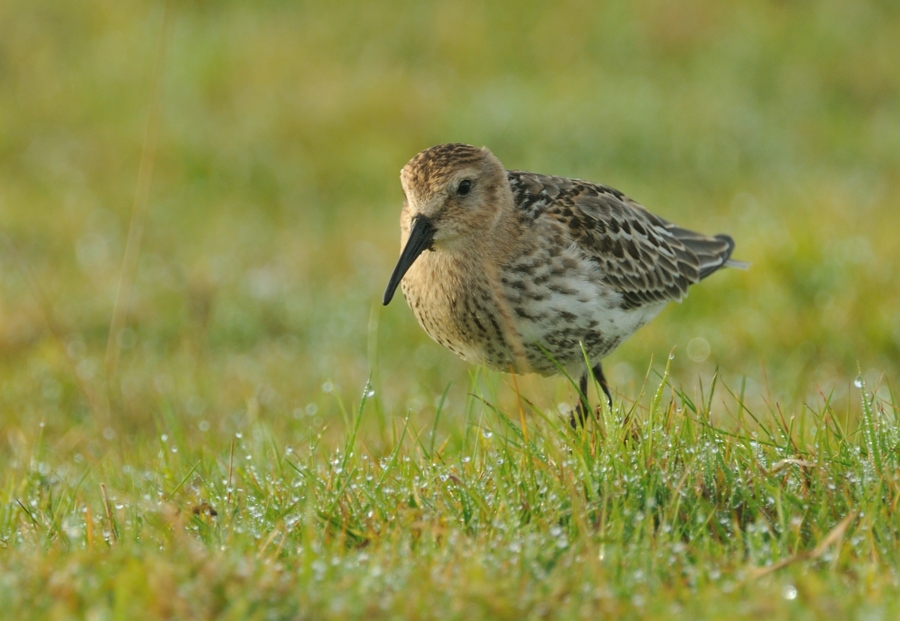 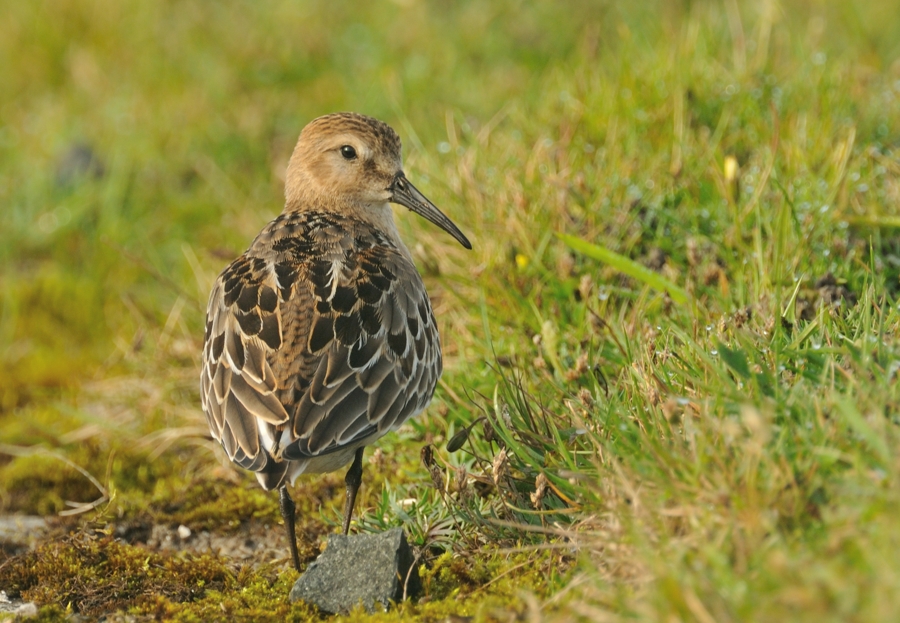 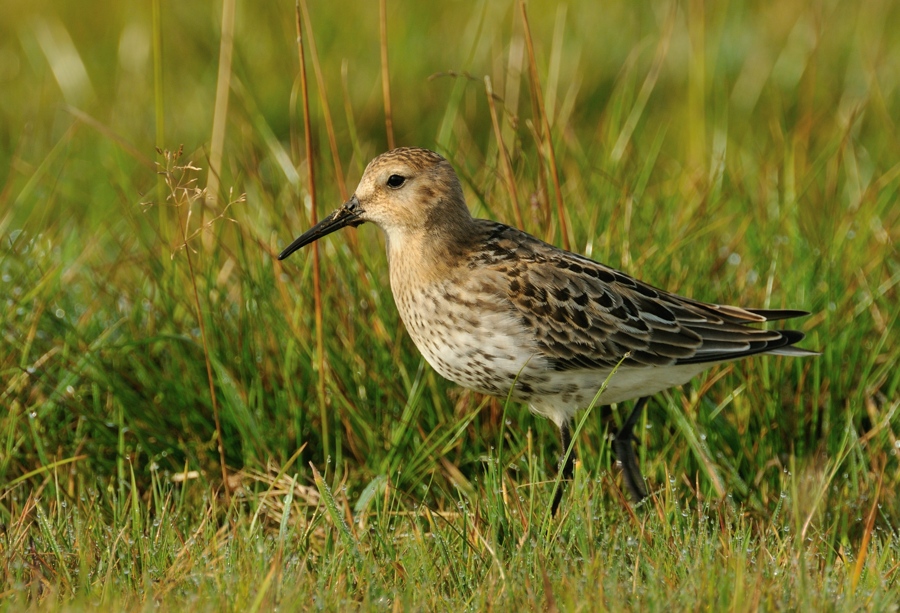 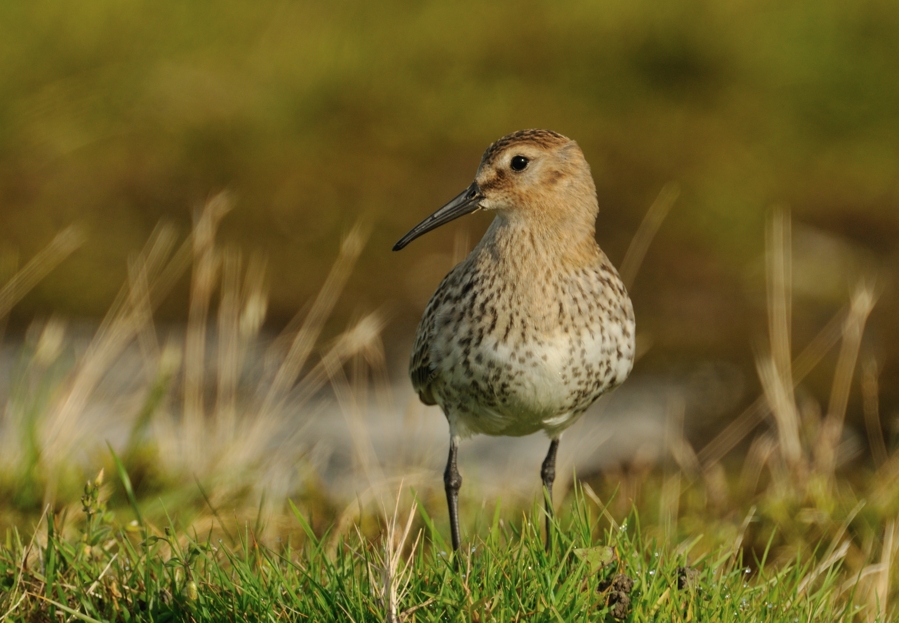 Marazion Beach has been busy with small waders this weekend.  Top of the list was Cornwall's 33rd Baird's Sandpiper, present for just one day on the most likely place in the county to find one.  This is the ninth Baird's found on Marazion beach.  Unusually this was an adult.  A delightful adult Buff-breasted Sandpiper provided its own entertainment as it fed among the sea weed. The supporting cast were high numbers of Dunlin (120), Turnstone (50), Sanderling (100) and Ringed Plover (200).

Below are some images taken on saturday: 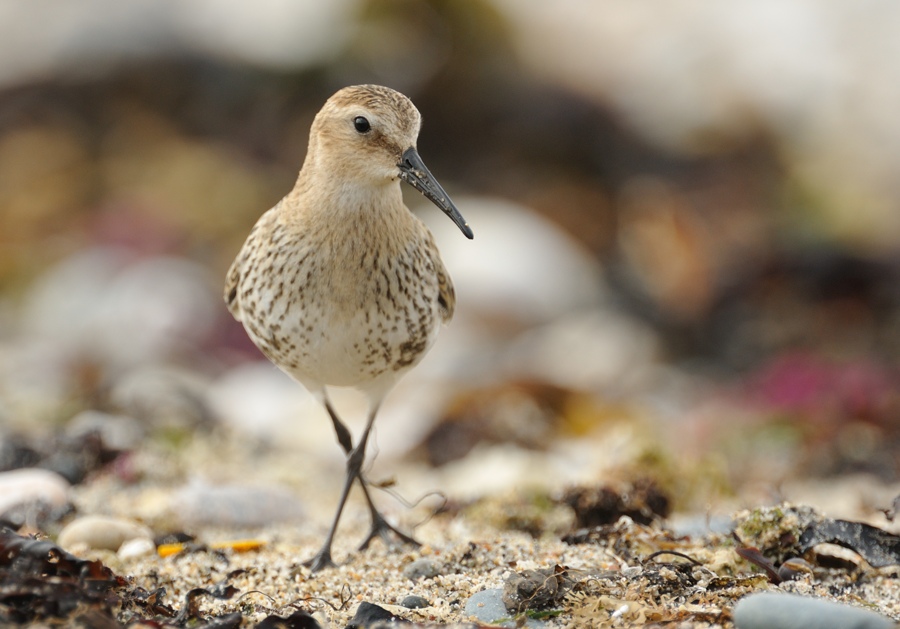 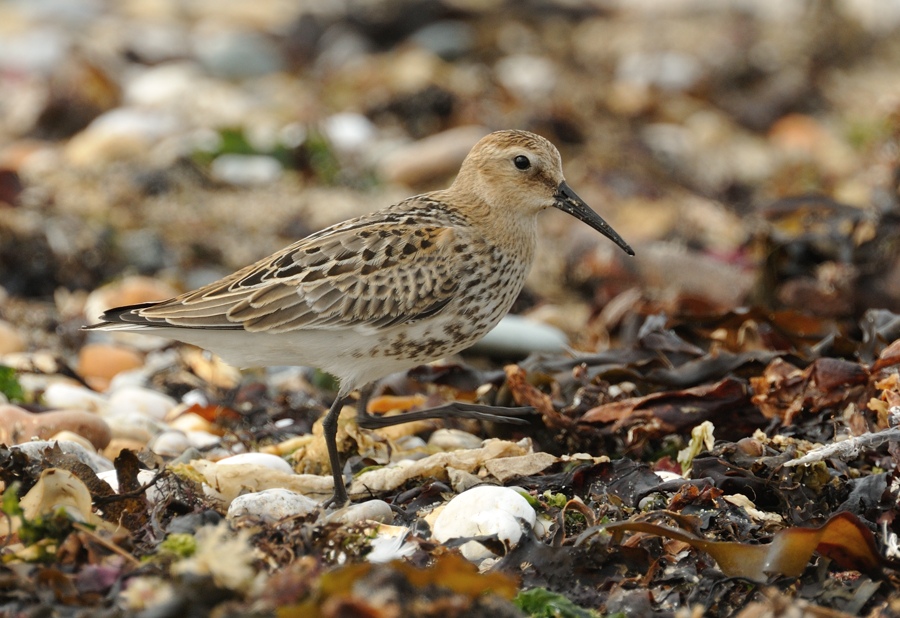 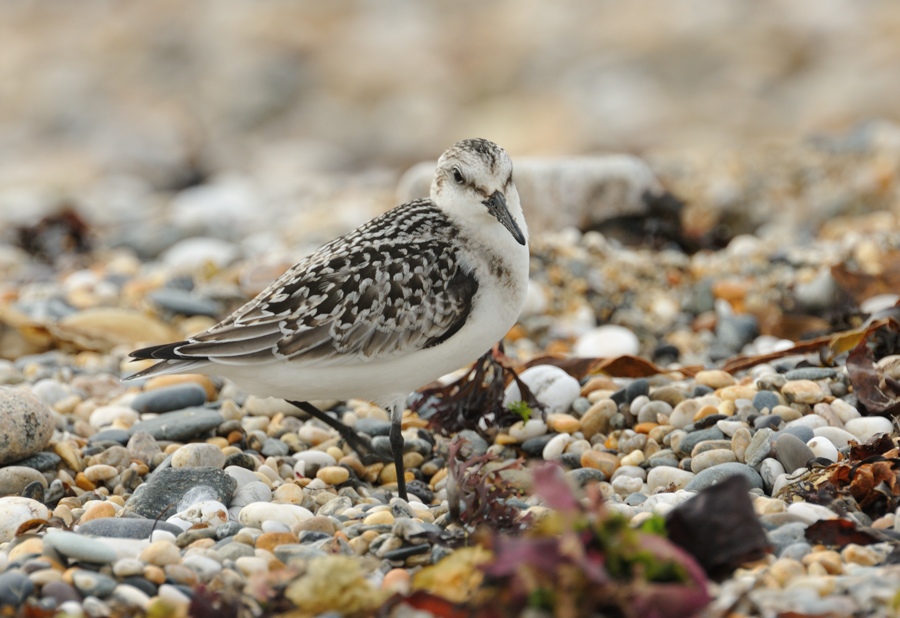 An adult Buff-breasted Sandpiper was found on Friday feeding on the seaweed on the beach.  This record follows a first year bird seen in the same location the previous year.  The location is unusual for Buff-breasted Sandpiper and it is quite conceivable that this is the same returning bird, as it passes through on its southerly migration.  This is also the first adult that I have seen. 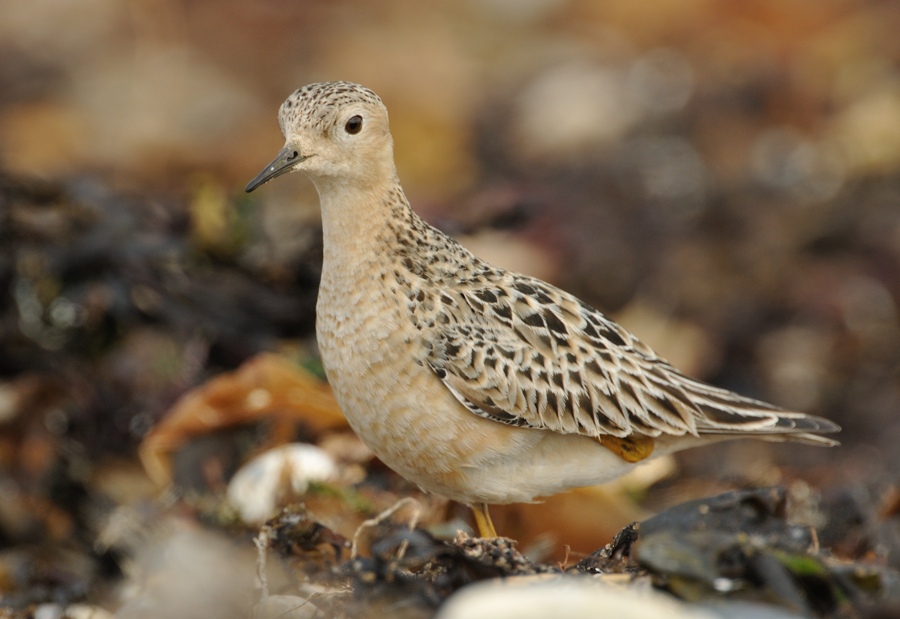 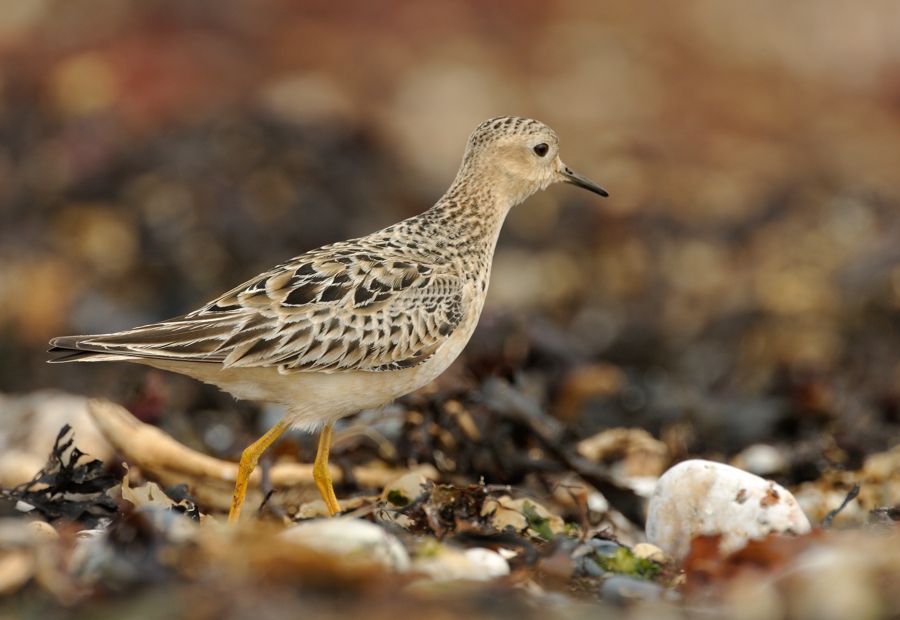 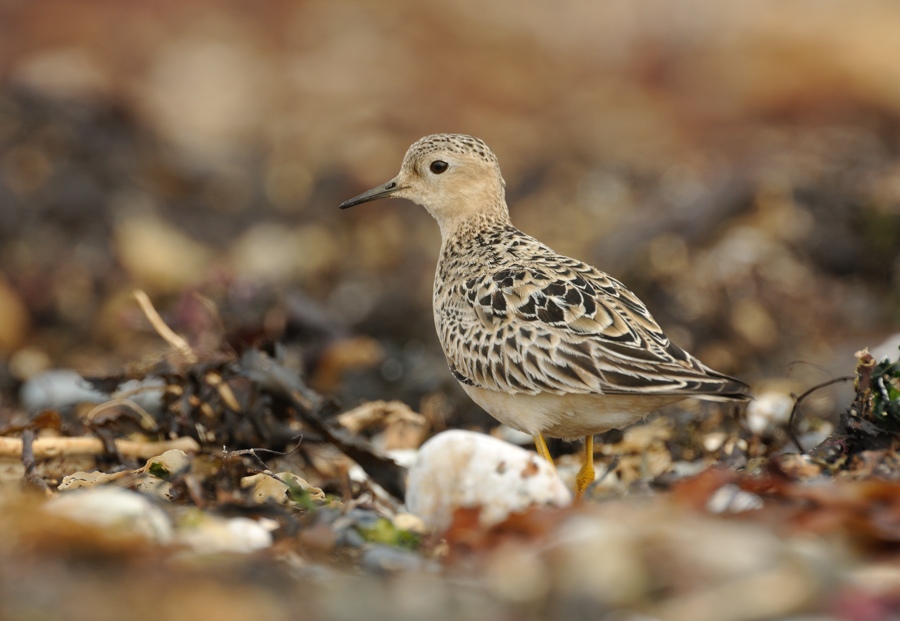 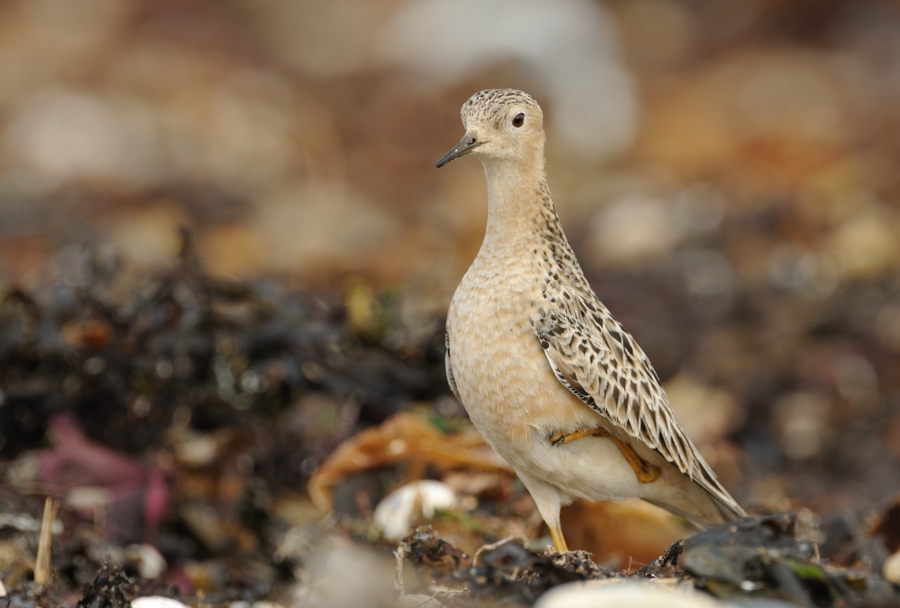 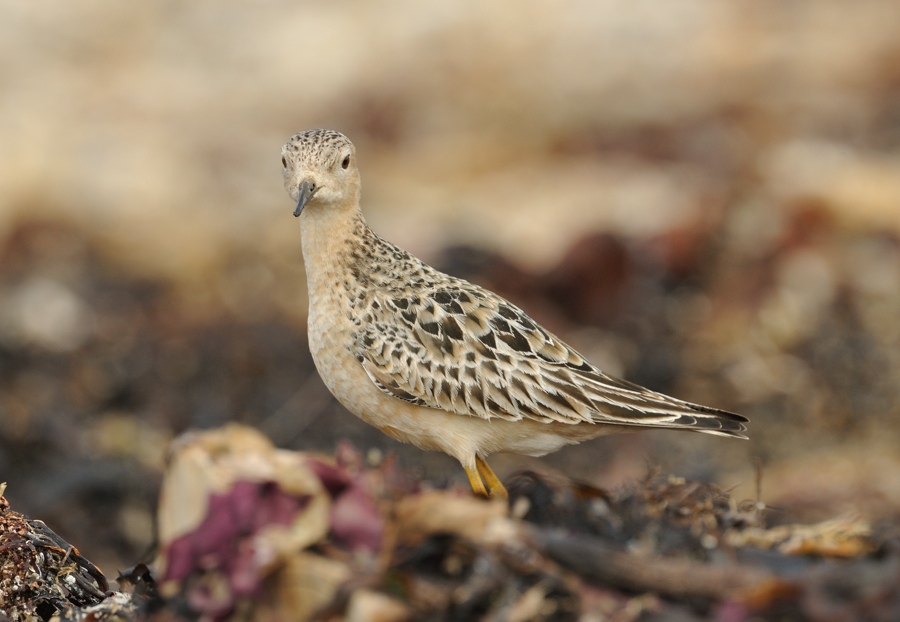