Waders took a leading role on the 1st with at least six Pectoral Sandpipers in the county including four at Siblyback Res. A brief Temminck's Stint at Drift was belatedly identified from photo's but could not be refound. Curlew Sandpipers were found at the normal wader hotspots indicating a good breeding season. All but one were first year birds.

Cornwall's 11th Blyth's Reed Warbler appeared in the famous Nanjizal nets on the 2nd. This site is the only location for all eleven records to date and now competes head on with Fair Isle and North Ronaldsay for this species.  Quite an astonishing feat in itself. A Melodious Warbler was also keeping company with the Blyth's.  (All previous Blyth's Reed records HERE ).

A Greenish Warbler was found next day at Nanjizal though it avoided the nets. Nevertheless, it was the first record for the patch and just the 10th for Cornwall. (Previous Cornwall records HERE).  Staying with rare passerines, a first year Citrine Wagtail was found at Walmsley sanctuary on the 3rd. This is Cornwall's 21st record.

An incredible seawatch from the Lizard Point on the 3rd will remain in the memory bank for years to come. An astonishing 652 Great Shearwaters, 65 Balearic, 36 Sooty, 12 Cory's, an adult Sabine's Gull and two Wilson's Petrels were logged.  The cream on the cake though arrived two days later. A Band-rumped Petrel (previously Madeiran Petrel) was seen close inside the Manxie line, just beyond the reef at Lizard Point. If accepted by the authorities, this will be just the 4th for Cornwall. A Long-tailed Skua was also logged on the 5th.  A second Madeiran Petrel was seen off Killigerran Head at midday on the 5th. The timings cancel out any thought of duplication.

The southerly wind continued to push uncommon seabirds towards the south coast on the 4th. Porthgwarra did reasonably well with 132 Great Shearwater, six Cory's, three Grey Phalarope and eight Arctic Terns.  A Black Tern appeared at Drift Res., an unusual site for this species.

Cornwall's second Blyth's Reed Warbler of the year was found at a private site at the Lizard (7th). This is potentially the 12th county record and first away from Nanjizal.

The wind turned westerly on the 7th. As expected, two Leach's Petrels were seen off East Pentire. A Long-tailed Skua and 120 Great Shearwaters were logged off Porthgwarra. Low numbers of Cory's continued to be seen from the normal westerly headlands.

The wind continued in a WNW direction on 8th and 9th September, delighting Pendeen seawatchers. The 8th started slowly in the morning. So slow that several birders left the site by midday. The wind changed subtly back to West in the afternoon resulting in a stunning passage of 20 Sabine's Gulls, five Leach's Petrels, a Roseate Tern, three Pomarine and three Long-tailed Skuas, 150 Storm Petrel, 37 Arctic Skua, 10 Cory's and 29 Great Shearwaters. Not to be outdone, Trevose, Fistral and St Agnes all recorded a Sabine's Gull and Leach's Petrels.

The first Yellow-browed Warbler of the Autumn made its way to Nanjizal on the 11th along with a Wryneck and a whopping 254 Blackcap and 57 Sedge Warbler. The latter species has seen a record 3000 individuals ringed this Autumn.  The Citrine Wagtail continued to be seen daily at Walmsley and a new Pectoral Sandpiper was found at Calstock wetlands.

The second Ortolan of the year was found near Three Chimneys on the 12th, a juv Bluethroat at Nanjizal and a juv Red-backed Shrike at Pendeen. All stayed for one day only. A Dotterel flew high over Park Head. This north coast site has had some dedicated watching recently. Patch work clearly pays as each visit turns up migrants. A first year Common Rosefinch was found at Chapel Porth on the 13th. Despite the name, this species is far from common. Just one or two Cornwall records annually is the norm.

The third Blyth's Reed Warbler of the year was claimed on the 14th at Windmill Farm. A Red-necked Phalarope was found feeding on the mud at low tide on Carnsew Pool. Sadly a misidentification delayed locals enough time to connect with this Cornwall mega. Unfortunately, it was flushed by a Peregrine and never seen again. To put this species in perspective, I've seen just two birds in 50 years. The second Greenish Warbler of the year was found at St. Levan. No fewer than five Ospreys were dotted around the county with two at Tresemple Pool giving a masterclass in fishing on the 17th.

A juv Night Heron appeared at Nanjizal, Cornwall's most reliable site for this species (18th). A Melodious Warbler was found in the willows just north of Kynance Cove. This patch is fast becoming the Lizard hippolais capital, following an adult Icterine there earlier. The second Yellow-browed Warbler was found at the Lizard and was in line with a notable fall on the English East coast. An early Lapland Bunting was also found on the Lizard.  Perhaps the biggest surprise of the day on the 19th was a Jack Snipe feeding at the edge of the mud at Drift Res.  The species is normally secretive so one feeding in the open was quite a sight.

Treraven Meadows hosted a Pectoral Sandpiper on the 23rd. Curiously, all of the Pectoral Sandpipers to date have occurred in East Cornwall. Two Glossy Ibis were at nearby Chapel Amble.  A Melodious Warbler was found at Soapy Cove, Lizard and a Sabine's Gull was seen off Pendeen. A male Surf Scoter with 109 Common Scoter was found here next day.

Some brief excitement came from Bray's Cott area on the 24th when a Pallid Harrier was reported. Analysis of photos showed some anomolies though. The general opinion was a 2nd cal year male Montagu's / Pallid Harrier hybrid.

Two Yellow-browed Warblers were found at Porthgwarra and Nanjizal on the 25th and two more the following day at Pendeen and Porthallow.  A stunning Ring Ouzel showing characteristics of the alpestris race was found at Kenidjack. A Red-breasted Flycatcher was found at the Penryn Uni campus, most likely arriving on the same weather system as the ouzel and yellow-broweds.

The wind turned north westerly to north on the 26th resulting in a good seawatch at Pendeen. 47 Cory's Shearwater, juv Sabine's Gull, Long-tailed Skua and a sprinkling of Grey Phalaropes were logged.

A significant movement of 458 Balearic Shearwaters on the 30th was logged at Porthgwarra along with a Sabine's Gull. A further 66 Balearics were seen off Pendeen with two Pomarines Skuas. A solid claim for the third Band-rumped Petrel of the month came from St Ives Island on the 30th.

Bird of the month: Band-rumped Petrels at the Lizard, Killigerran and St Ives.

Posted by swopticsphoto at 19:26 No comments:

Blyth's Reed Warbler is a species of Least Concern according to Birdlife International. The species breeds in temperate Asia and Eastern Europe and winters in Bangladesh, India and Sri Lanka where it is one of the most common wintering warblers. Its range is expanding westwards and this accounts for the increase in records in the UK and in Cornwall.

There are twelve records to September 2022 with the first being as recent as 2015.  Nanjizal holds the trump card as all of the first eleven records have been recorded here. 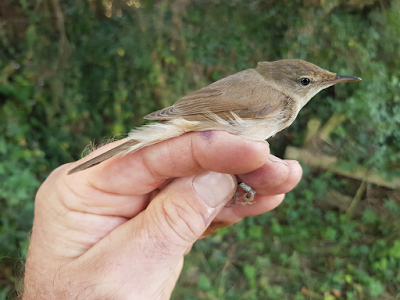 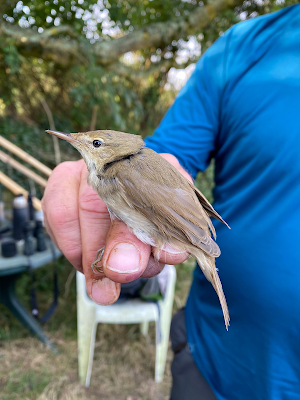 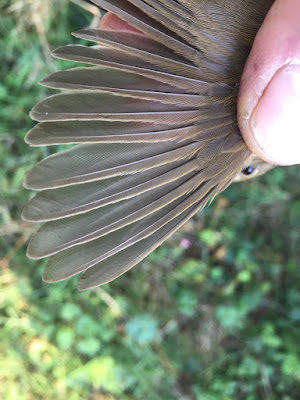 Posted by swopticsphoto at 14:33 No comments: