A collection of wheatears

I've been waiting an awful long time to see Pied Wheatear in the UK, let alone Cornwall.  I narrowly missed one in Shetland back in 1995 and I couldn't get to the male at the Dodman because I was working away.
So its taken 34 years from seeing my first rare wheatear at Portgwarra to the recent Pied Wheatear at Trevose.  The male Desert Wheatear in November 1984 sticks in my mind most.  I think it was just the seventh UK record at the time and many top name listers made the overnight journey to Porthgwarra to tick it.  It was found by Laurie Williams and Rod Hirst on the moor just past the stone wall.  I can remember now as it stood out like a beacon in the heather.  What a find.
The adult male Black-eared Wheatear was found by Martin Elliott in the fields at the top end of Nanquidno valley in March 2002.  Despite its striking black and white plumage, this bird is of the Western form.  Its the only Black-eared I have seen in Cornwall.
The Isabelline Wheatear was found by Paul Freestone in October 2016 whilst birding on Godrevy Head.  It stayed just one day and was admired by scores of local birders.  It was the second record following a short stayer bird seen at Church Cove Lizard and by John Martin, a visitor birder.
So there you have it. A 34 year span to notch up the four rare wheatears.  Will there be more? Yes.  Wheatears are responding well to the increasingly hot summers.  A White-crowned Black Wheatear would be nice... 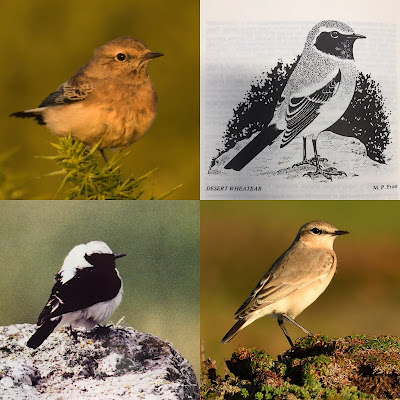