The following is a trip report from a visit to Madeira in June 2022.

A group of six birders from West Cornwall booked three days with the well known Madeira Windbirds tours and an additional day-tripper sailing to Desertas Island. Windbirds always depart Machico harbour at 3pm and the Bonita da Madeira departs Funchal at 9am.

We spent seven days in Madeira but this amount of time is unnecessary if its just seabirds you're after. Away from the coast, there's limited birdlife and all of it can be mopped up in a single morning. Any future trips would be for five days maximum.

Windbirds is a professional company specialising in watching seabirds and cetaceans. Hugo and Catarina set up the company18 years ago with a ten-seater, 11 metre rib. Two powerful outboard motors get you 25 miles offshore in approx. 90 mins. The team have exact coordinates of the best places to bird.

You need full waterproof kit including leggings.  Essentially, you are going to get soaking wet, especially on the South side return leg or when you bird the North of the island on the outward leg. There's no formulae on which side to sit. If its windy, you'll get wet.  I wore deck shoes but a pair of crocks or old sandels is fine. (Your feet will also get wet). A wet bag is also essential for your kit.

Windbirds use a tried and tested method of chumming from a floating bucket of diced fish, laced with fish oil. The bucket is re filled several times during the five hour session.  The rib remains alongside the bucket throughout and never leaves the chum slick. The chum slick is created and pretty soon, the petrels and shearwaters arrive.

Bonita da Madeira is a large day tripper boat specialising in trips to Desertas Grande. The captain will pursue cetaceans or seabirds of interest but keep a respectful distance. The ship lands passengers on Desertas Grande island with a useful and knowledgeable guide to the island's wildlife. We were shown Bulwer's and Cory's breeding burrows. We also saw 12 Desertas Petrels and hundreds of Cory's on the voyage over to the island.  For 80 euros, its well worth it. A free cooked meal and wine is also offered. Well recommended.

The following species accounts give some idea of what can be seen:

Desertas Petrel. Over the four days at sea ie. 25th, 26th, 27th and 28th June, we saw 12, 4, 4, 6 birds respectively. Some views were distant and others reasonably close to the boat.  The name Pterodroma is Greek for Wind Bird, and as the name suggests, these birds thrive in high winds and power through the chum slick at impressive speeds. Some circle round the chum bucket but generally move on quickly. You have to be quick off the mark with id. and any photography.  The species breeds on Bugio Island, which is one of the three Desertas islands (adjacent to Desertas Grande).

Zino's Petrel: Over the four days at sea ie. 25th, 26th, 27th and 28th June, we saw 0, 2, 3, 2 birds respectively and had some really good close views. This species is the number one target for visiting birders. Up to date information from birders at the breeding site on the Madeiran mountain estimate around 80 breeding pairs and a total of just 300 birds. Thus, this species is super rare and extremely vulnerable, especially to feral cats and rodents on the mountain where it breeds.

We visited the mountain breeding site at midnight to listen to them calling. Whilst the conditions of rain, mist and strong wind weren't ideal, we did hear the mournful sounds coming from the burrows. The visit is organised by Hugo and Catarina. (50 Euros.)

Bulwer's Petrel: Over the four days at sea ie. 25th, 26th, 27th and 28th June, we saw hundreds daily. The species breeds locally on Desertas Island and becomes easier further out in deeper water. Bulwer's visits the chum bucket  and affords close views. That said, its a very tricky bird to photo. Its crazed flight at super speed means only the best modern cameras keep up with it. I took about 500 shots of Bulwer's and just a dozen were acceptable. We were shown a nest site on Desertas in a stone wall with a bird sitting on the nest.

Madeiran Storm Petrel: This species is a prime target and despite local breeding, is surprisingly difficult to connect with. We saw just two birds on the last day. Both visited the chum slick, one staying for 20 minutes giving stunning views. Bob Flood from Scilly Pelagics also saw one the following week. This species was a key target for us as there are a couple Cornwall records. We wanted to familiarise ourselves just in case one flies past Pendeen!

Windbirds' skill and experience in approaching this species at the chum bucket was perfect, manoeuvring the rib perfectly to obtain the best views.

European Storm Petrel: Just one was seen on day 2.

Wilson's Storm Petrel: One adult in moult was seen on day 3. It visited the chum bucket and regularly worked the chum slick for a 30 minutes affording excellent views, sometimes close. 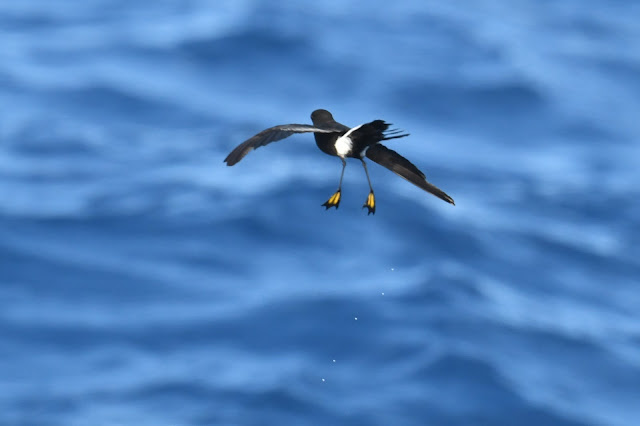 Cory's Shearwater: The second commonest seabird behind Bulwer's Petrel. Large rafts of scores and occasionally hundreds of birds seen. There were more on the northern pelagic return leg. Perhaps a couple thousand near the narrow channel linking north and south of the island. This was the largest concentration we saw.  Visits to the chum bucket gave stunning close views. 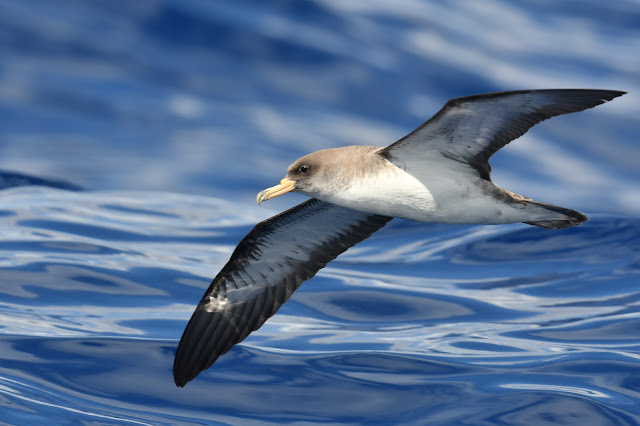 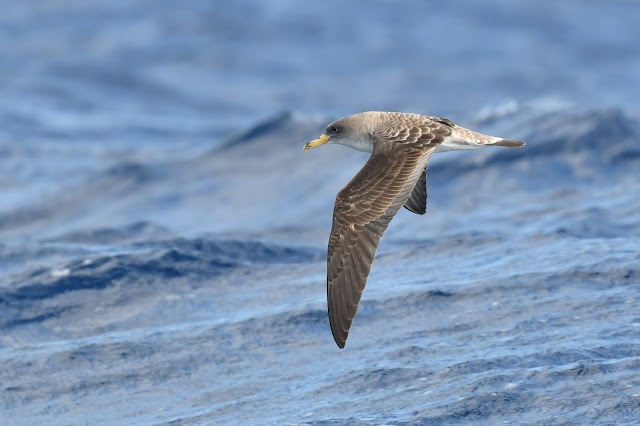 Manx Shearwater: No more than ten birds seen over the four days. The species is suspected of breeding on Madeira but as yet unproven. Regular summer records suggest otherwise.

Little Shearwater: None seen on our trips but Niall Keogh found one on a ferry trip from Madeira to Porto Santo. One was also seen well from the Windbirds pelagic the following week. Little Shearwater is a prize find and is not guaranteed.

Rock Sparrow: One pair seen on the walk to the east end of the island, about 1k from the turning circle car parking area. Berthelot's Pipit and Canary also seen here.

Trocaz Pigeon: We saw a few at Palheiro Gardens north of Funchal and singles dotted around the vast mountain forests.  Madeiran Firecrest was also seen and heard here.

Peregrine Falcon: We saw two on the coast at Machico. Apparently this species is rare here. Hugo and Catarina stopped the rib to photo it. We also saw the occasional Sparrowhawk, Common Buzzard and Kestrels. A moribund House Martin found on the Desertas Grande shoreline was unusual.

In summary, this is a relatively easy place to fly to, fairly cheap living and easily accessible with a hire car. Depending on your culinary and drinking habits, the total trip cost from door to door shouldn't cost more than about £1200. Well worth it.