June weather started warm and settled with an easterly airflow. The 18th saw an abrupt change with an unseasonal northerly airflow, often cold and wet. The 21st saw a return to hot and sunny conditions but changed again on the 24th to a westerly airflow.

THE FIRST rarity of the month was a female Rustic Bunting at Nanjizal on the 3rd. Two Rosy Starlings together at the Lizard and a Common Nightingale at nearby Kynance were also seen on the 3rd. The Red Kite influx disappeared as quickly as the arrival.  Maximum count was just seven over Sancreed.

The European Roller was last reported on the 29th May at Praze-an-Beeble completing a seven day stay.  An unsubstantiated report of another Roller came on the 2nd between Port Navas and Lamanva.

The drake Garganey seems settled at Marazion Marsh in its third week. Its been calling\singing\displaying to female Mallards during its long stay. An unseasonal Pochard appeared at Par Beach pool and a Goosander at Newquay boating lake (6th).

An unsubstantiated, late report of a Red-footed Falcon appeared on the 5th of an apparent 2cy male at Carn-les-Boel.  Hopefully some supporting description and photos appear later on this exciting falcon.

The singing male Nightingale was still performing at Kynance on the 6th. A Turtle Dove was showing at nearby Lizard village and the first Sooty Shearwater of the summer season appeared at Lizard point.

A male Red-footed Falcon was seen over Trevellas, St Agnes on the 8th, perhaps the same bird reported on the 5th?  A European Bee-eater was hunting over fields at Troon, Camborne and at nearby Redruth, a stunning adult Rosy Starling visited a private garden.  An unseasonal Tundra Bean Goose spent the day at Hayle Estuary on the 12th.

Cornwall's seventh Pacific Golden Plover was found at Stithians Reservoir on the 15th. It was present next day and delighted a good number of visitors.  It looked settled late in the evening of the 16th but departed overnight and wasn't seen again. FULL REPORT here A Quail was also heard singing in the fields to the east of the reservoir (15th). 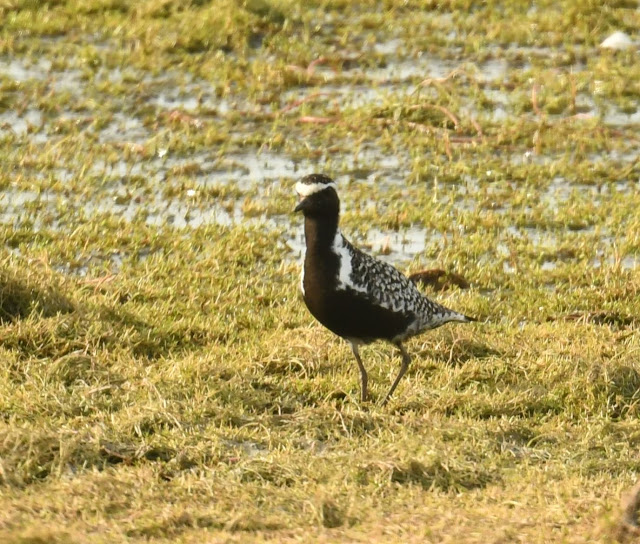 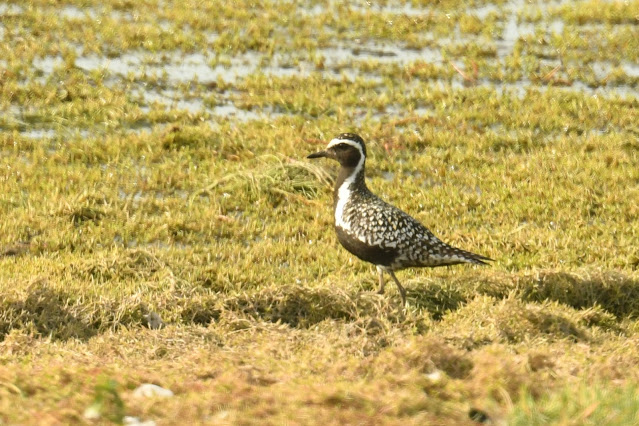 Red Kites continued to be recorded throughout June in single digit numbers.  A non breeding Great White Egret was seen on the 20th and 21st at Lower/Upper Tamar Lake and a Glossy Ibis was reported from Carharrack on the 19th.

An Icterine Warbler was heard singing at the seaward end of Nanjizal on the 22nd. This species has become quite a rarity in recent years. The county will be lucky to record even one annual sighting.

The 26th was easily the best seawatching day so far this year. A probable Fea's Petrel, 46 Cory's Shearwater and an adult Sabines's Gull passed Porthgwarra.  An unseasonal Snow Bunting was also seen and heard calling. A further 36 Cory's were counted in the afternoon along with a Sooty Shearwater and two Arctic Skuas. Further Cory's included three at the Lizard, eight from Tater Du and two from Pendeen.  88 Cory's were logged at Porthgwarra on the 27th.  Just single numbers were recorded the next day.

Runner up: Early and unseasonally high numbers of Cory's Shearwater.