August weather started typically warm and humid with a westerly airflow.  Mid month was exceptionally hot, leading to more humidity and an almost tropical feel. End of the month saw the wind shift to easterly with high pressure.

The Least Sandpiper was present on the 1st for its sixth day at Drift. A Wood Sandpiper and up to seven Green Sandpipers were keeping good company. A juv Garganey and two Shoveler were also seen together at Drift on the 2nd.

Seawatching took precedence on the 2nd when the wind switched to south westerly.  A Fea's type Petrel was seen off Pendeen at 8.35am and a decent haul of 176 Cory's Shearwaters off Porthgwarra. A further 40 Cory's and 11 Balearic were counted off the Lizard. A possible Fea's Petrel was also seen at 13:55 off Porthgwarra.

Rare seabirds continued to be found on the 3rd.  A long overdue Caspian Tern was seen flying past the Lizard point and a Wilson's Petrel was found in relatively calm conditions off Pendeen. So calm that no locals thought it worthwhile visiting this famous headland. Rame Head also scored well with two Long-tailed Skuas, a first summer and second summer.  The Least Sandpiper remained until 3rd August, lasting eight days, despite disturbance from idiots birding from the front of the hide and walking the shingle margins.  A healthy 11 Green Sandpipers and three Wood Sandpipers visited Drift on the 7th.

An unusual record at Nanjizal during the first week of August involved a male Black-headed Wagtail (Feldegg) seen on several occasions. Even more odd was female of the same race and another female, possible a Blue-headed type associating together.  The first wandering Rosy Starling appeared at St Buryan on the 5th.

Early passerines on the 7th and 8th included a Pied Flycatcher at Porthgwarra, Garden Warbler at Kenidjack, Lesser Whitethroat at Pendeen, three Tree Pipit at Nanjizal and a juv Cuckoo at Bartinney.

A Spotted Crake was seen at Nanjizal pond on the 10th. This species is decidedly difficult to come by these days, averaging about one a year. Marazion marsh was once the place to find them but sadly this site is just a shadow of its former self. There are previous records of Spotted Crake at Nanjizal, so itsringed on the 10th.  The start of a respectable passage of Green Sandpipers also began on the 10th with 17 at Drift and 23 on 13th.

An adult Icterine Warbler was found on the 11th by Lizard stalwart Dave Collins. This county rarity was just reward for the hours of patch work by Dave. It was still present on the 13th. An influx of Pied Flycatchers arrived on the 11th with a maximum of five at Nanjizal.

Two Common Nightingales were trapped in the Nanjizal nets on the 13th. This site is the number one spot for Nightingales. More migrants appear here than any other location in Cornwall (possibly the uk?). Another Nightingale was trapped at Nanjizal on the 14th, this time a control from Rutland Water. A fourth bird was found at Pendeen.

An impressive haul of Green Sandpipers were counted at Drift Res. on the 13th. At least 23 were seen with four Wood Sandpipers for good measure. Another Wood Sandpiper was seen at Marazion marsh, an unusual site for this species.  The extreme heat has dried up the small isolated ponds and as such is the likely explanation for so many waders finding their way to Drift and Stithians.  Returning Ospreys were seen at Tresillian and Drift.

A Stunning Black Kite was photographed well at Drift Res. on the 14th.  Sadly it was misidentified and submitted as a Marsh Harrier, meaning no locals would see it.

Pied Flycatchers and Whinchats continued to be found in low numbers in the normal coastal valleys on the 14th.

Bird of the month candidate for the lucky few was a stunning Aquatic Warbler trapped in the nets at Nanjizal on the 15th. In line with several national records this month, it was only time before one was found in Cornwall.

Aquatic is indeed a prize find. The last record was also at Nanjizal: 1CY trapped 7th Sept 2019; then another 1CY trapped by E. Inzani, processed by Pete Rosevear 29th Aug 2018.  Before that, a 1CY photographed in the field on the Lizard 3rd October 2015 (T Blunden).  The last record from Marazion was way back on August 12th 2012 (also trapped).   Marazion Marsh was once THE place to find Aquatics but has since been knocked off the perch.  No less than six recent records have come from the nets at Nanjizal. 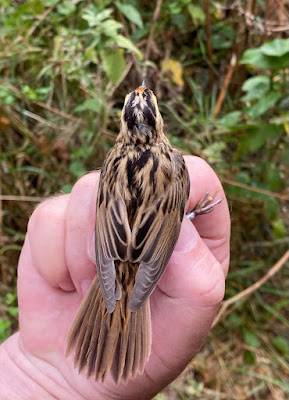 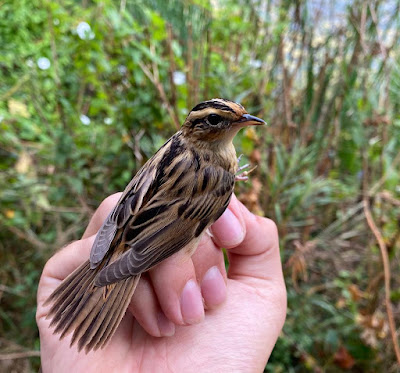 Seawatching started a new phase on the 14th with a Wilson's Petrel and adult Sabine's Gull off Pendeen. 42 Storm Petrels were seen here in the evening. Another adult Sabine's Gull was seen on the 15th along with a flurry of Arctic and Common Terns. 120 Storm Petrels were also counted. A Black Tern, one Cory's and one Great Shearwater were seen off Porthgwarra on the 16th.

The wind shifted to North and up to 30mph on the 17th. Two Wilson's Petrels was seen with 89 Euro Stormies off Pendeen, plus another Sabine's Gull.

Events changed for the better on the 18th.  The south coast was the place to be. Sea temperature graphics for the period showed a warmer belt of water stretching from West Africa to the south west approaches. Predictably a Desertas/Fea's type Petrel was seen off Porthgwarra, and it or another was seen later in the afternoon here.  If that wasn't enough, two Wilson's Petrels were seen.  The start of a decent passage of large shear's included 26 Cory's and 50 Greats.  Lizard Point scored with four Great Shearwaters.

A Wilson's Petrel lingered off Porthgwarra on the 19th and 20th, whilst four more Wilson's were seen well and photographed from the AK pelagic out of Falmouth. The Desertas/Fea's Petrel was seen again on the 20th late afternoon, prompting a large twitch the following day.  Those assembled early enough were treated to close views of the Pterodroma. More memorable was the tussle with an Arctic Skua for a couple minutes.  Six Wilson's Petrels, 389 Great Shearwaters, 156 Balearics and 46 Sooty Shearwater completed a stunning day.  At least ten Wilson's Petrel were counted off Southerly Point, Lizard, but interestingly, less than a handful of large Shears were seen. Finally, a single Wilson's was seen off Pendeen, completing a record haul of at least 17 birds from mainland Cornwall.

A juv Long-tailed Skua was seen off Rame Head and possibly the same bird seen later off the Lizard (21st).

Almost unnoticed among the seawatching hysteria was a Red-backed Shrike at Caerthillian, Wryneck at Nanjizal and a secretive Melodious Warbler at Kenidjack.

Rare seabirds continued to be seen on Monday 22nd.  The Desertas/Fea's Petrel was seen off the Scillonian near Land's End and a high count of 151 Cory's Shearwater passed Porthgwarra.  Three Wilson's Petrel were seen from the ever-productive AK Wildlife pelagic in Falmouth Bay.

94 Balearics were counted off Downderry on the 23rd. South East Cornwall is a productive area for this species, indicating that Balearic Shearwater enters the Channel further east than the large shears.  Finally, a single Wilson's was seen off St Agnes Head on the 23rd, rounding off an incredible period for rare seabirds.

The start of a notable passage of Black Terns began on the 24th with a single off Pendeen.  Three were seen off Newquay on the 26th and an impressive 20 in four flocks off Pendeen.  This species has become scarce in recent years, prompting the Society rarities committee to consider requesting descriptions.

A Sabine's Gull, four Grey Phalaropes, 22 Cory's Shearwaters and a Little Tern were seen off Pendeen on the 25th. The little Tern Spent some time feeding near the Three Stone Oare.

A Melodious Warbler was trapped at Nanjizal on the 26th. It had a fat score of 6 indicating that it had been feeding well locally. This bird could conceivably be the recent Kenidjack bird relocating. The First Little Stint of the year appeared at Drift.  A Little Tern found at Hayle Estuary later relocated to Porthkidney.

Two Dotterels were observed near Windmill Farm on the 28th and two juv Pectoral Sandpipers were found at Siblyback Lake.  A third Dotterel was flying around the Land's End area. A healthy seven Curlew Sandpipers at Hayle and a Temminck's Stint at Maer Lake rounded off a notable arrival of waders.

An Ortolan Bunting was found on private land near Skewjack on the 28th and a mini arrival of Wrynecks were also found in West Penwith. The top prize came on the 29th when a stunning first winter Paddyfield Warbler was pulled out of the Nanjizal net. What a fantastic time Nanjizal is having!  Continuing with the run of rare passerines, a juv Woodchat was found at Carn Owles and considered to be the badius (Balearic) form.

A Little Tern appeared at Drift Res, an unusual location for this species on the 30th.  Two Spoonbills appeared at Hayle Estuary and the Gannel Estuary.

In summary, August was an exciting month with some fantastic seawatching, rare waders and a sprinkling of rare passerines.

Runners up: Paddyfield Warbler and Aquatic Warbler at Nanjizal, Caspian Tern off the Lizard.