November weather started with strong South to South-West winds and heavy rain. The month ended pretty much the same with heavy rain from the west.

The third Pallass' Warbler of the Autumn was found along Lloyds Lane, Lizard on the 1st, following one at Long Rock and another at Kennack Sands on 31st October.

Leach's Petrels were on the move on the 2nd. Seven were counted off Pendeen, three off Mousehole with one showing a dark rump. Two more Leach's at Downderry, two at Hannafore, one at St. Agnes, three at Cadgwith completed the best day of the year for this species.  Another Band-rumped Petrel was claimed off the Lizard and possibly the same dark rumped Leach's type also off the Lizard Point. The wind on the day was South to South-West.  With increased seawatcher awareness, its becoming clear that Pendeen is certainly productive on SSW winds. Porthgwarra doesn't have exclusive rights to this wind direction anymore!

The wind shifted to WNW on Friday 4th.  As expected, more Leach's Petrels were seen. An impressive 39 were counted off St Ives Island and 13 from Pendeen. Of interest, none were seen from Cape Cornwall indicating that the "geographical corner" of Pendeen lighthouse is the normal final seabird departure site in N Cornwall. An unusual Velvet Scoter was photo'd among 98 Common Scoters at Pendeen.

Treraven meadows hosted some geese. A White-fronted Goose, two Barnacle and a Pink-foot were among the Canada's on the 4th. A Whooper Swan was also at nearby Walmsley.

A Radde's Warbler was photo'd in a St. Just garden on the 4th. The finder must have had quite a shock while viewing the bird feeder!  Not to be outdone, a Dusky Warbler was found in the Nanjizal nets on the 5th.

A presumed returning Ring-necked Duck appeared at Dozmary Pool.  This deep water pool is the favourite site for this species.  Last winter, at least ten birds were present here, a UK record.

Short-eared Owls started to appear at the normal wintering spots. An unusual record was a migrant flying along the coast with Kittiwakes off Pendeen. It attempted to move inland but was chased off by the local Choughs.

More significant numbers of Great Shearwater appeared on the 6th with two sizable counts. Porthgwarra recorded 363 and another 292 from the Lizard. The latter site also notched up two Leach's Petrels and a Little Auk. The seawatching season just keeps giving! More strong southerly winds on the 7th Nov pushed nine Leach's Petrels, one very late Storm Petrel, 71 Great Shearwater and 27 Sooty Shearwater towards Porthgwarra.  Meanwhile, the Lizard notched up 483 Great Shears and a duplicate 27 Sooty's. 144 Manx was a high late season count and a juv Kumliens Gull was a surprise.  An exhausted Long-tailed Skua was photo'd in care at Newquay Airport on the 8th.  A late juv Sabine's Gull and yet another juv Long-tailed Skua were seen from Pendeen on the 9th. What a great year this species has had.

Cornwall's seventh Hume's Warbler was found with a Yellow-browed Warbler at Swanvale on the 9th.  The last Hume's Warbler in the county was 2007 when one was video'd, sound recorded and eventually trapped in Cot Valley. It was first located on the 23rd December and last seen 23rd February 2008, presumably attempting to overwinter. There are nearly 200 UK records but most appear on the east coast. It remains a very rare bird in Cornwall.

The Pallass' Warbler at Lloyds Lane, Lizard was still present on the 12th. A late Wryneck showed well at Kynance gate on the 13th and a flighty Serin at nearby Old Lizard Head.  A Hawfinch was found at Treleaver and another at Penryn Uni.

A juv Pallid Harrier was found in the Trevilley and Nanjizal area on the 14th. On a couple occasions it was flushed from the nets area. This species has become more regular in the county though the last officially accepted record was 2009.  Clearly there are unsubmitted Cornish records.  Its status reflects the increase across western Europe and the UK. A Short-toed Lark was found nearby in the stubble fields around Trevilley. 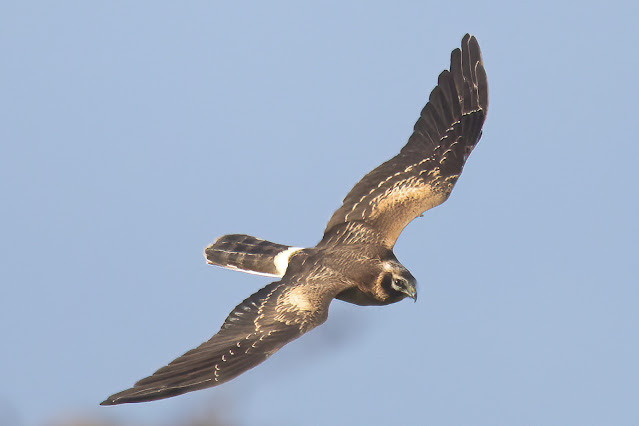 Cornwall's first Black-faced Bunting was found in the Nanjizal nets on the 19th. The juv female was trapped, ringed and later released in nearby stubble fields. By pure chance, the Pallid Harrier appearance created a Saturday morning twitch and the assembled birders were treated to the bunting release. The irony is that the harrier failed to show... The 19th was indeed a special day as a female Desert Wheatear was found at Falmouth.  Sadly it didn't stay long. This is Cornwall's 11th record following a male at Penberth in November 2020. A late Red-backed Shrike was found at Chapel Porth.

The wind turned westerly on the 18th, strong at times. The following three days were particularly noteworthy for late skuas, petrels and Little Gull.  Pendeen was the place to be.  On the 18th, 22 Little Gull passed the famous watchpoint, one of the highest totals in years. In addition, one Little Auk and a rare Blue Phase Fulmar and five Grey Phalaropes were seen.  On the 20th, a juv Long-tailed Skua, four Pomarine Skua, two Great Skua and three Arctic Skua, Leach's Petrel, two Little Gull, 3 Grey Phalarope, three Great Shearwater, 11 Sooty Shearwater and good selection of mixed divers were seen in bitter conditions.  25 Great Shearwater were seen off the Lizard on the 26th, continuing the amazing season this species is having.

A Dusky Warbler was found at Nanjizal cove on the 27th Nov, a typical late Autumn date. The Short-toed Lark was still present in the stubble fields nearby at Trevilley.  The returning adult Ring-billed Gull reappeared a Lelant Saltings.
The meteoric rise of the Cattle Egret continued. On the 27th, an incredible 167 were counted at Amble Marsh. This number at a single site is a county record. In addition, a further 85 were at Carne Creek, Gillan and another 21 at Loe Pool, Helston!
A late Sabine's Gull was seen off Newquay on the 28th, along with a more expected Leach's Petrel. Correct me if I'm wrong, but there are no true winter records of Sabine's Gull in Cornwall?
Yet another Dusky Warbler (3rd for November) was found in the Nanjizal nets on the 29th. This was in addition to the Nanjizal Cove bird as it was seen independently the same day.  A Little Bunting was also found between Little Hendra and Cot.

Bird of the month: Black-faced Bunting at Nanjizal, first county record and 8th for UK.

Runner-up: Pallid Harrier, a stunning juv in the Trevilley area.