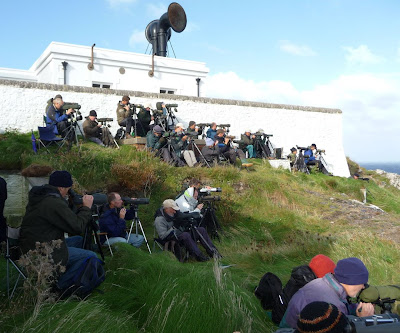 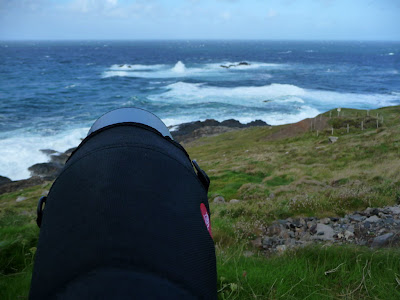 The tail end of Hurricane Bill was just enough to give Cornish seawatchers the best seawatch of the season so far. Most of us put in at least ten hours today and everyone was rewarded, though not everyone connected with every bird on offer. Only three saw the Little Shearwater and about ten missed the late Wilson's Petrel, including Lee Evans ;-) A lingering Red-necked Phalarope was an unexpected late find and from memory, this is the first accepted record since 1992 at Perranporth (correct me if I'm wrong).
The species of the day has to go to Sooty Shearwater. I personally counted 261 though undoubtedly more went unseen. The continual stream of sooties from first light was a rare sight to behold. I know Sooty Shearwater is not the rarest seabird, but you had to be there to understand this. Perhaps more expected were the five Sabine's Gulls, all adults still in full summer plumage. Two Cory's and five Great Shearwaters were also expected but one of the latter flying past the rocks in front of us gave stunning views.
The totals for the day are as follows:
261 Sooty Shearwater
5 Great Shearwater
2 Cory's Shearwater
30 Balearic Shearwater
2000+ Manx Shearwater
1 Yelkouan Shearwater (showing characteristics of)
1 Little Shearwater
1 Blue phase Fulmar
34 Arctic Skua (nearly all adults)
1 Pomarine Skua (ad)
23 Great Skua
6 Common Tern
6 Arctic Tern
32 "Comic" Tern
1 Black Tern
1 Sandwich Tern
9 Storm Petrel
1 Wilson's Petrel
5 Sabine's Gull
1 Common Scoter
3 Grey Phalarope
1 Red-necked Phalarope
1 Puffin
3 auk sp.
Wind direction: West to North West 23mph gusting to 50mph.
(The images above were taken today).

Email ThisBlogThis!Share to TwitterShare to FacebookShare to Pinterest
Labels: Pendeen