If one species grabbed the birding headlines this Autumn, then the shy Hawfinch must be a candidate. The species is not a major rarity but more a scarce breeding resident in the UK.  The fascination though stems from its natural shyness.  The species prefers to feed and rest in tall trees, though can be seen feeding on the ground occasionally.  Most observations are usually from a distance or flyovers.  This Autumn has changed all that. An unusual eruption has occurred. Hundreds, perhaps thousands, have moved out of continental Europe.  The assumption is a healthy breeding season followed by a shortage of food, prompting a mass migration towards Britain and France.  UK birders have benefitted from a rare opportunity to see the species well in unfamiliar surroundings.

The Hawfinch invasion has been noted across the UK, most notably on the east and south coasts but also inland.  Cornwall has also done well with upwards of 150 sightings (some overlap). The maximum count was nine together in west Cornwall with many sightings of singles and pairs. The species is totally absent as a breeding bird in Cornwall with the nearest population in mid Devon (scarce).  Their preferred tree is the Hornbeam, which is also absent from Cornwall. This would explain their absence here as a breeding bird. The species breeds across Europe and temperate Asia. It is mainly resident in Europe, but many Asian birds migrate further south in the winter. 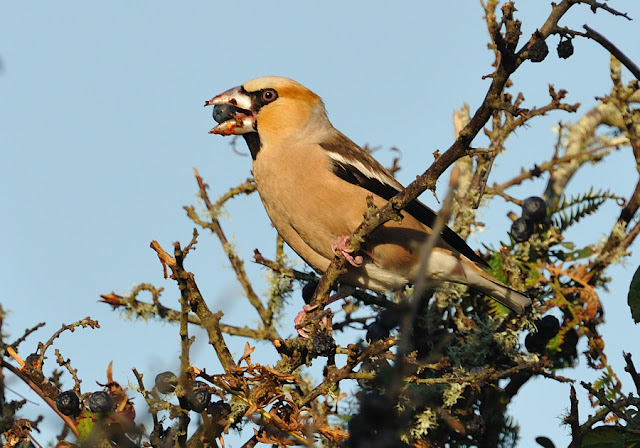 The Pacific Diver has returned to Mount's Bay, Cornwall for its 11th year.  This mega rare diver is one of only five species in the genera.  It has faithfully returned to the same wintering site every year since 2007.  There are less than ten UK records.  Birders travel from far distances to tick this species, even a group from Norway "twitched" it.  Sightings cannot be guaranteed though.  It usually stays well out in the bay and a telescope is a must for a decent view.   It breeds primarily in northern Canada and eastern Siberia and winters along the Pacific coast of North America.  Given where it breeds, this bird certainly puts in the miles.

Email ThisBlogThis!Share to TwitterShare to FacebookShare to Pinterest
Labels: Hawfinch