January started mild with fairly settled weather with a north-east to easterly airflow.  End of the month was clear and colder, though temperatures never dropped below zero.

The mini influx of Tundra Bean Geese continued over from December.  The three birds at the Lizard were present on the 1st but a New Year's Day shooting party spooked them.  Presumably the same three relocated to Upper Tamar Lake and were on show to the month-end.  Two more left Walmsley Sanctuary at first light mid month. An impressive flock of 16 Russian White-fronted Geese spent a few days in the field opposite Croft Pascoe.

The adult Ring-billed Gull and the wintering Great White Egret spent the month at Hayle Estuary.  Cattle Egrets were recorded in high numbers with 34 at St Clement and another 41 at Walmsley.  Egrets are expanding their range northwards with unprecedented numbers and records being broken.  The Great White Egret is the first instance of a bird actually overwintering at a favoured site in the county.  Whilst many species are declining, egrets seem to be increasing.

A male Green-winged Teal was found at Devoran on the 2nd but disappeared after a few days.  Keeping with the duck theme, five Ring-necked Ducks were seen at Dozmary Pool on the 2nd.  Even more strange were three hybrids with a drake Tufted Duck at Foxhole mid-month.  Presumably they have bred somewhere fairly close.

The White-tailed Eagle from the Isle of Wight introduction scheme continued to be seen in the Colliford area, eventually hitting the local BBC news. The new breed of photo-birder was soon accused of photo-baiting the bird for a closer pic and news since was suppressed.

An unusual sighting of Grey Phalarope was found at Marazion Marsh on the 4th but it only stayed for an hour.  "Grey Phals" winter in the Atlantic and can be seen during strong winter gales.  This one though was a pure fluke chance find by Graham Lawlor.

A possible Pacific Diver was reported from the Charlestown area on the 4th.  The Mount's Bay Pacific Diver has failed to show this season, which ends its 13 years of consecutive appearances.

Walmsley recorded an astonishing 18 Glossy Ibis on the 6th. In common with the increase of egrets, Glossy Ibis' also seem to be on the rise.

Pendeen and St Ives were the places to be for seawatching.  A reasonable westerly wind on the 9th pushed a couple Little Auks in close, whilst an above average movement of divers included eight Black-throated, six Great Northern, nine Great Skuas, five Manx and a Glaucous Gull.  Five White-fronted Geese put in an appearance at Walmsley.

Divers have been in relatively short supply this winter.  Pendower scored well on the 10th with 12 Great Northern and five Black-throats, one Red-necked Grebe, two Slavonian Grebe and 12 Common Scoter.  These numbers are well down on previous years though. Perhaps the mild weather is just too mild to push divers south.  Two first winter (2nd cal year) Glaucous Gulls and a Little Gull were in the Newlyn area.

The presumed returning Black Guillemot off Swanpool appeared on the 11th and was joined by another on the 20th. The first Yellow-browed Warbler of the year was found on the 12th at St Austell sewerage works.  Just two Bitterns were recorded during January, one at Walmsley on the 12th and another photographed at Par beach pool. Another Yellow-browed Warbler was found at Crackington on the 16th.

At least three Red-necked Grebes were recorded on the 14th: singles at Hannafore, Torpoint and Helford. The Pendower bird on the 10th could be a fourth bird. Hannafore is well known for grebes; in addition to the Red-necked, a Black-necked, 11 Great Crested, five Little and a Slavonian were recorded on the 16th.  61 Avocet were also available for year listers at nearby Wacker Quay.

The first Balearic Shearwater of the year was seen from the Mermaid 2 in Mount's Bay on the 17th.

The Dusky Warbler found at Tregilliow, St Erth in December was still wintering in the area and was re-found on the 19th.  140 Avocet were counted at Kingsmill Lake and represents an important count.

An unseasonal Ring Ouzel was found feeding in Porth Loe valley, Porthgwarra on the 22nd. This record joins other out-of-context "summer" migrants this winter including the Hoopoe in North Cornwall in December and a dozen Swallows in Penzance. Two Black Guillemots off Swanpool could be the first flock in Cornwall?

The wintering Avocet on Truro River continued to be seen with the 120 Black-tailed Godwits until the month end. Occasional Avocets are seen on passage around Hayle but the returning Truro bird is the furthest westerly wintering Avocet in the UK.

A first winter male Surf Scoter and Velvet Scoter were found at Pentewan on the 24th. An adult Iceland Gull favoured Cape Cornwall golf course at the end of the month but was also seen in Newlyn harbour on Sunday 23rd.

The month ended with two Little Buntings, one at Goss Moor (30th) and another off Bosisto Lane.  Presumably both are (returning?) wintering birds to their favoured areas. 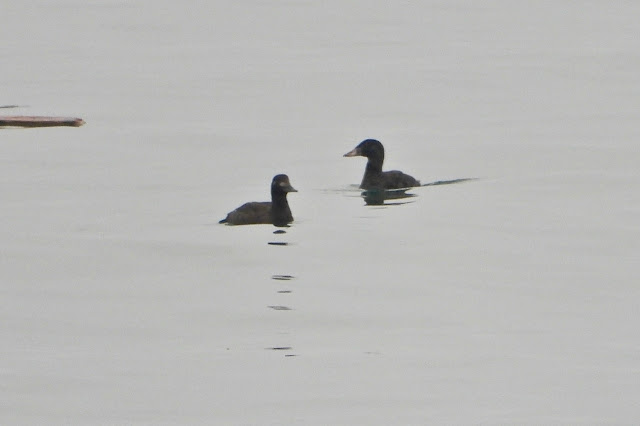 Bird of the month: Surf Scoter at Pentewan.