Sensational news broke on Thursday 13th October when a first year male Blackburnian Warbler was found on Bryher, Scilly. Blackburnian Warbler is a dream Nearctic warbler and high on every British birder's want-list. The Bryher bird is the first for England and just the fourth UK record but the first truly twitchable bird.

Previous records have all occurred on islands and been short stayers.

The species is widespread in north-east North America and south-east Canada. It migrates south through the Eastern seaboard, reaching its wintering quarters in Central America, Columbia, Peru and Ecuador.  A friend who visited Ecuador this winter said he saw hundreds in the highlands.  The species status is of Least Concern.

The species name derives from an English naturalist named Anna Blackburne (1726-1793) who lived in Warrington. She had a brother in the States who sent insect and Bird specimens to be identified. Descriptions were then sent to Linne for the Systema Naturae.

My own adventure to see the Bryher bird involved a small charter boat from Penzance called the Vanessa Jane. Ten of us departed Penzance at 7am and three hours later were picked up at Scilly, mid channel by the Meridian. We were hoping to land at Bryher but local by-laws and customs denied us this benefit. We saw the bird by 10:45 and were home again at 19:30. Total cost £93. We also had close views of five Great Shearwaters and a dozen adult Puffins on the way. 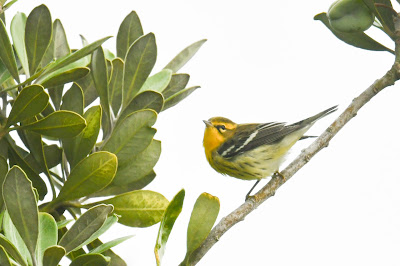 Video by John Chapple.
Posted by swopticsphoto at 20:45