There are approximately 36 records of Common Crane in Cornwall up to 2010.  This Autumn, Cornwall has hosted an unprecedented influx.  The number of birds in 2011 is likely to equal or better the total records to date!
The first reported Common Crane seen in 2011 was a single bird flying south over Bosistow Lane and other sites around Land's End on 10th Nov.  On the 12th Nov, an impressive flock of 24 flew over Winnard's Perch near the Bird of Prey Centre.  All but one of these were adults.  By dusk, they had settled in a stubble field at Trewince Farm, St Issey.  The same flock was present all of the next day (Sunday 13th).  This same flock was seen flying over St Kew Highway on the 15th in the morning and later in the afternoon at St Mabyn. The flock increased to "c27" at St. Mabyn on the 17th Nov. Adrian Langdon's excellent images can be seen here: > Adrian Langdon
On Monday 14th Nov, six Common Cranes were found at Trethvas Farm, Lizard (images below).  Two more were seen at Madron but disappeared by 9.58am.  Possibly the same two were seen later in the day flying over Troon, Camborne at 14.30.  Meanwhile, the six adults at Trethvas Farm were still present on the 17th and appeared content feeding on vegetable matter on the corn-cobs.  They were always wary and kept their distance. Sam William's photos from today in challenging conditions can also be found here Sam Williams
Thus the Cornwall total for 2011 so far is a maximum possible 37 birds, but definitly 32.
In context, in County Cork, Ireland, a flock of 19 Cranes are still to the west of Waterrock.  There have also been seven birds south of Burgh Castle (Norfolk) in recent days and of course the resident 30 are present in the Horsey area of East Norfolk.  Others have also been recorded in Devon, Hampshire, Suffolk and Dumfries & Galloway in the last couple days.
The origins of birds recorded in western Europe originate from breeding populations in Scandinavia and the Baltic countries.  They winter in Spain and Portugal after resting up in large numbers in Germany and France. 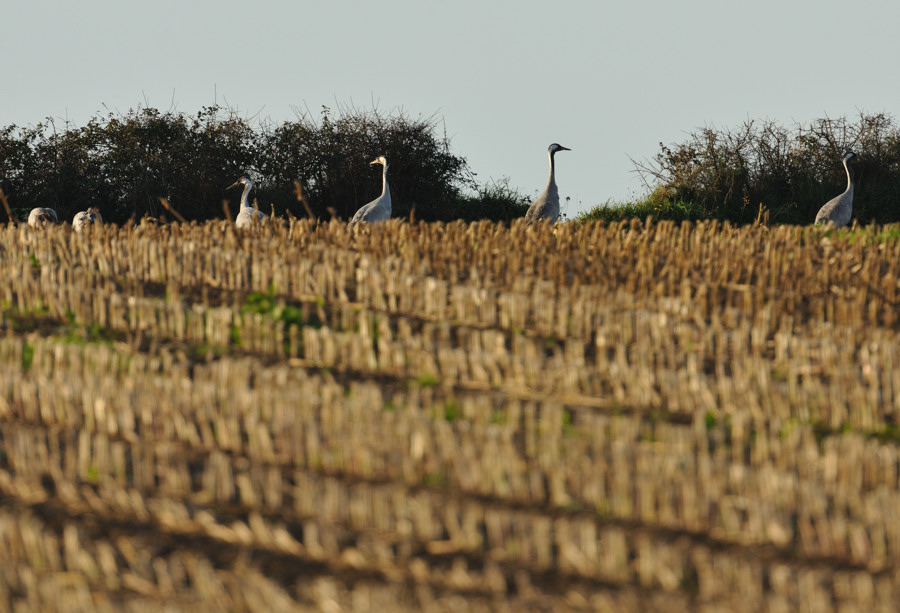