Below are some images of the Greenish Warbler seen in Church Cove, Cornwall yesterday. The identity of this bird has changed daily since it was found mid week. Birdguides has reported it as both Green (?) and Greenish. Pirate Birder has done some good spade work though and managed to get a recording of its' call. A sonogram of the call has been confirmed by bird vocabulary expert Magnus Robb as a Greenish Warbler. It was an interesting bird though, in that several features asked some questions, eg, the pale lores, pale yellow wash to the supercilium, pale yellow wash to the ear coverts and undertail coverts and initially, the supercilium not reaching the upper bill. However, regarding the latter, on close inspection in the photos, the pale super does reach the bill. Observers also mentioned how its' general colour impression seemed to change though light and bright foliage plays a part in this respect. One could hardly say this was a typical Greenish Warbler. A more detailed account can be found on Lee Evans' blog, http://uk400clubrarebirdalert.blogspot.com/2009/10/greenish-warbler-it-is-on-call-but-not.html and also on Pirate Birding blog : www.piratebirding.blogspot.com 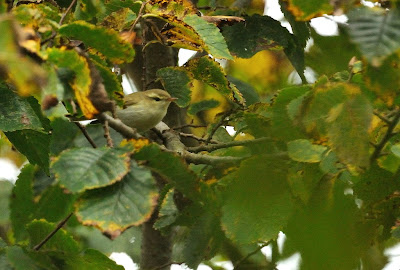 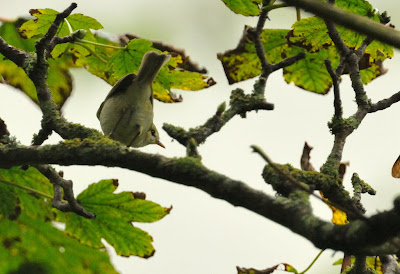 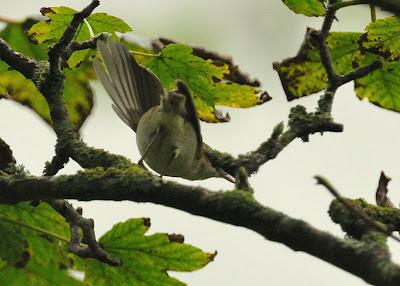 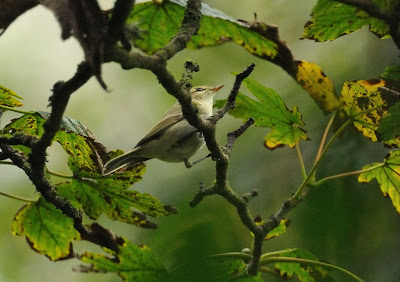 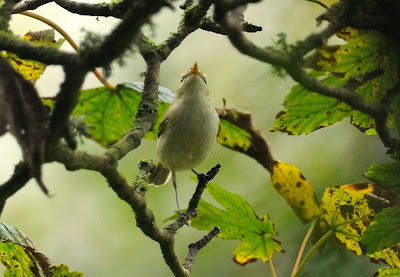 EXIF Detail; Dull light; aperture wide open at F/5.6, ISO highest available. Shutter 1/350s to 1/500s. White balance cloudy. Exposure 0.0. All images have been cropped by 33% to 45% and sharpened with the Unsharp tool. Colours are natural and unaltered.
Posted by swopticsphoto at 08:35